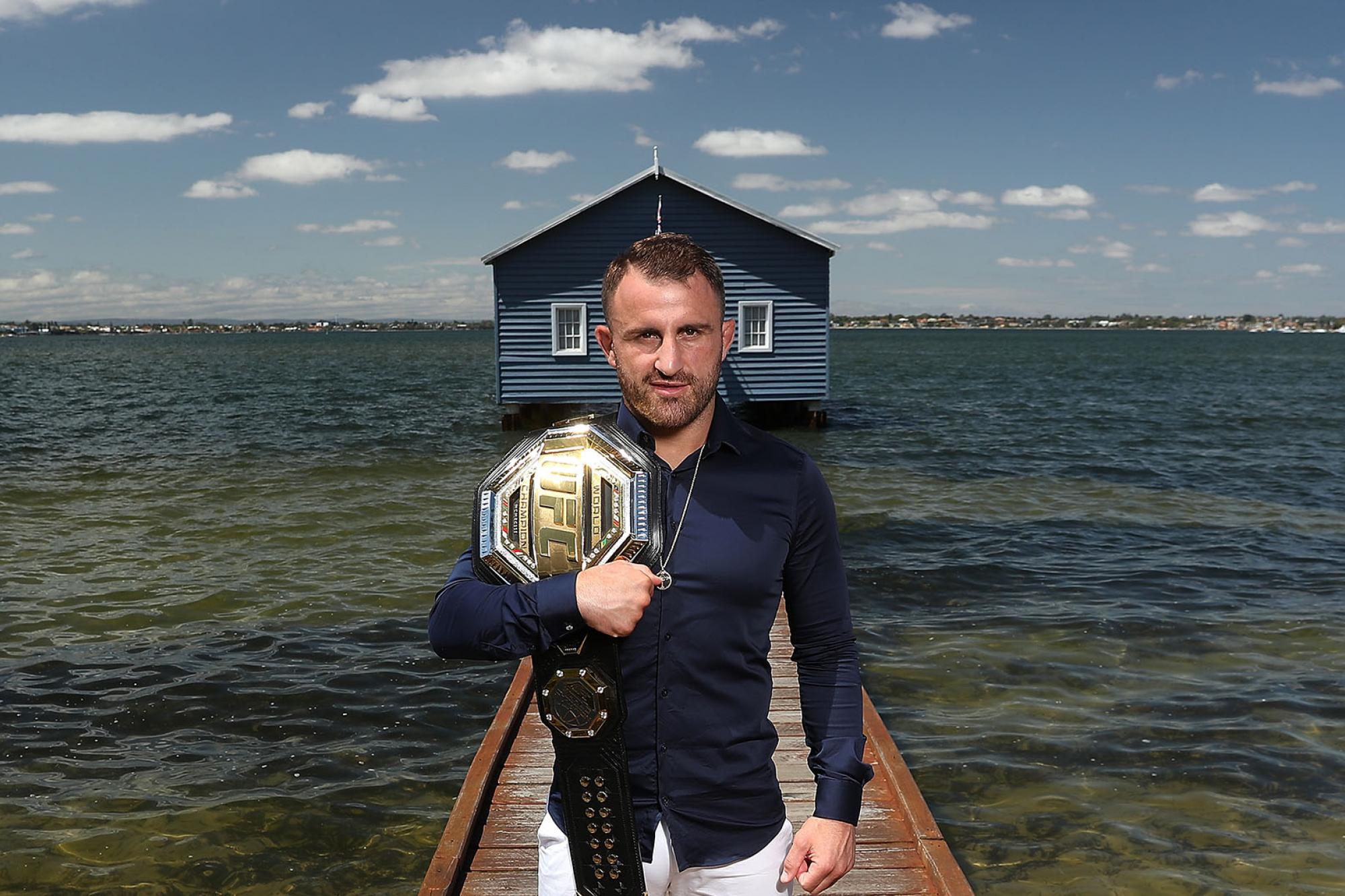 Alexander Volkanovski saw all of his happening, and not just in that typical “fighter believes he’s destined for greatness” way where everyone says they’re going to win UFC gold and few ever come close.

Ahead of his bout against Chad Mendes at UFC 232, the Australian upstart scoffed at the notion that then-champion Max Holloway had cleaned out the division, stating without hesitation that he was a bad matchup for the talented Hawaiian.

These weren’t just words meant to garner attention or improve his chances of eventually landing a championship opportunity; it was a simple statement of facts from a lifelong athlete who was very aware of his own skills and abilities.

Less than five months later and riding high off his second-round stoppage win over Mendes, Volkanovski was preparing to venture to Rio de Janeiro, Brazil, where he would face Jose Aldo, the former king of the featherweight division. Once again, the former rugby man offered his thoughts on how things would shake out.

“I believe a year ago I was a prospect and now I’m planning on being one of the best to ever do it by the end of the year,” he said. “That’s how quickly things change.”

A year after facing Mendes and seven months after beating Aldo in his hometown, Volkanovski was in Las Vegas, facing off with Holloway in the co-main event of UFC 245.

Twenty-five minutes later, he was the best in the world.

“Shooting through the ranks, you’ve got this goal of ‘I want to get this belt,’ and as I said, I always knew I was the man to do the job,” said Volkanovski, who scored a unanimous decision victory over Holloway in December to dethrone the Hawaiian champion. “Once I did it, I wouldn’t say I expected it, but I sort of did.

“I was ready for this — I knew it was going to happen — but it’s unreal,” added the Australian, who runs it back with Holloway this weekend at UFC 251 in Abu Dhabi. “Knowing what it feels like to tick off them goals and one of them being to be a UFC world champion is a pretty good goal and a pretty good f***** thing to tick off your list, you know? It’s a big deal.”

In claiming the featherweight title, Volkanovski not only became the first man to defeat Holloway at 145 pounds since Conor McGregor, but he also pushed his own UFC record to 8-0 while extending his overall winning streak to 18 consecutive fights

Despite his masterful performance against Holloway in their first meeting and his impressive run of success inside the Octagon thus far, Volkanovski remains a somewhat unheralded champion.

“I’d be lying if I said it doesn’t bother me or it hasn’t bothered me because that’s just facts,” he said of still not quite getting his due from the MMA community at large. “I probably don’t get the credit that I deserve, but the people that know the game, that study the game, and the fighters got nothing but respect for me.

“You’re always going to have some doubters and even though I’ve already beaten Max, I’m going to have people who doubt me,” continued the ever diplomatic and understanding Volkanovski. “I’m not hating on them, even though I feel a little disrespected because, at the same time, Max was a great champion.

“There is a reason everyone thinks he can take me out and it’s because he’s a great fighter, which shows you how big my win was,” he added. “Once I go out there and prove myself again, people are going to have no choice but to be like, ’S***, this kid is no joke,’  even though you don’t shut someone out for five rounds by luck.”

Part of what may contribute to Volkanovski still not quite getting the respect he deserves given everything he’s accomplished is that there is no one single thing about him that really stands out, and I mean that as a compliment.

He’s essentially done the same thing as his friend and City Kickboxing teammate Israel Adesanya by blazing a trail to the top of his division without suffering any setbacks, but unlike “The Last Stylebender,” Volkanovski isn’t spitting fire on the microphone, performing choreographed dances before and after his fights, or doing anything flashy inside the cage.

He’s just a well-rounded fighter with incredible conditioning, a high Fight IQ, and a special ability to keep himself level-headed at all times when he’s inside the Octagon.

“I’ve always been pretty good with nerves, but I’ve always, always tried to control my nerves,” said the 31-year-old. “I like to be in control of everything, so every time I feel like I’m getting a bit nervous or excited or frustrated in there, I pull myself down.

“From doing that time and time again, it’s just part of the process for me now. Now I’m so good at keeping myself level-headed that I can go out and execute a game plan, do what needs to be done.”

A second straight victory over Holloway on Saturday night will immediately prompt questions about where Volkanovski stands in the pantheon of all-time greats, certainly in terms of the featherweight division and potentially even in the UFC as a whole.

Conversations about his legacy and an iconic, solitary barnyard animal will lead to heated debates on social media, and plenty of people forecasting how he matches up with emerging featherweight contenders like Zabit Magomedsharipov, Yair Rodriguez, and Calvin Kattar, as well as divisional staples like Brian Ortega and Chan Sung Jung.

But the reigning featherweight champion sees all of those things as a byproduct of success and that is all he’s focused on — today, tomorrow, and always.

“My main motivation is my family and I appreciate that I’m able to buy a house for my family, with a pool for the kids, living on the beach,” explained Volkanovski. “I appreciate being in this position where I can finally do this because I put a lot on hold for a long time — and my family put life on hold themselves so that I can chase this dream — so now I give back and I appreciate it. But it doesn’t end here.

“I’m not fighting for legacy; legacy will come with what I’m fighting for, and that’s to be successful,” he added. “Those things are going to happen because I need that for my family, not because I’m chasing those statuses.

“You can doubt me, but I’m going to keep proving you wrong,” he added with a laugh. “If you bet against me, you’re going to keep losing money.”