The phrase “stacked card’ is overused so much in combat sports that it tends to lose its meaning. However, if one needed a reminder of what such a card actually looks like, look no further than the slate headed for the Windy City Saturday night at UFC 225.

On the early FIGHT PASS prelims alone, for crying out loud, Chicago gets legends like Rashad Evans, Clay Guida, and the return of No. 1 flyweight contender Joseph Benavidez. The prelims (the prelims!) score matches like Alistair Overeem vs Curtis Blaydes in a most-pivotal heavyweight brawl, and Claudia Gadelha vs Carla Esparza, who finally meet after years of trying to make that fight happen.

Close your eyes and point to any spot on the Chicago card and you’ll find yourself pointing to a great matchup. There are literally reasons to watch anywhere and everywhere you look, so here are just a few.

These are the reasons to watch UFC 225.

Their first matchup a year ago is already a classic. Both fighters gave enough to see the bout go wire to wire, but the advantage in significant strikes and a stellar takedown defense was enough for Whittaker to reign supreme.

Whittaker will look to keep it standing again, but that alone won’t seal a win. Romero steamrolled Luke Rockhold without even attempting a takedown, and he has won numerous pro fights where the fight didn’t go to the ground. Both men wield knockout hammers in their hands.

This is the first we’ll see of Whittaker since that first go-round with Romero at UFC 213. He was forced out of what should have been a homecoming in Perth at UFC 221 with more than one severe illnesses, including a staph infection. He’s likely too much of a seasoned fighter to show anything identified as “ring rust”, but the world will be watching to see if ‘The Reaper’ has returned to form.

RDA vs Covington for the Interim Welterweight Title

In the absence of Conor McGregor or Jon Jones, Colby Covington is gunning to be the most divisive fighter in MMA, and in insulting the entire nation of Brazil (and just this week, the entire city of Chicago), he may well be on his way. The “bad guy” persona has worked thus far in that there will be just as many people tuned in to cheer for Covington as there will be viewers praying he gets starched into another dimension. Covington’s mouth might not be making him many friends, but he does walk the walk. He boasts a 13-1 pro record and is riding a five-fight winning streak into Saturday.

He may have drawn the short straw, however, in getting paired with Rafael dos Anjos for this title match. RDA looks like a fighter reborn since moving up to 170, and was last seen pummeling former champ Robbie Lawler into an injury-induced vacation. Dos Anjos has never been one for trash talk, but the bashing of his native Brazil couldn’t conceivably have sat well with him. Instead of engaging in the pre-fight verbal fireworks, RDA merely offered a warning.

“I’m a cold blooded fighter. Once I step in the Octagon, there is no trash talking. Just two guys fighting.” 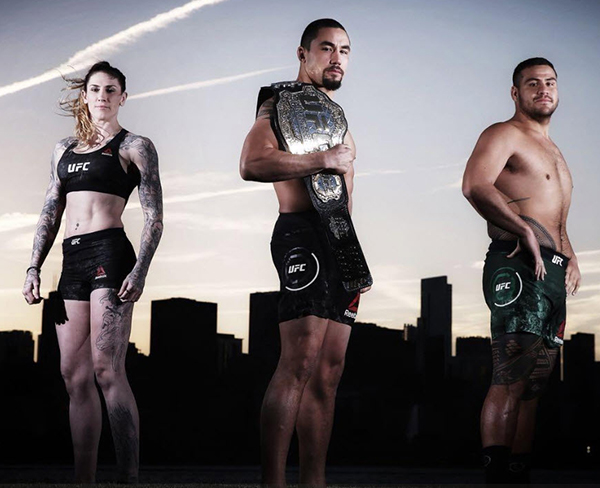 The Australian Invasion in MMA continues to be a very real phenomenon, and the talent at UFC 225 offers more evidence.

In addition to aforementioned champ Whittaker, young heavyweight phenom (and “shoey” enthusiast) Tai Tuivasa gets a chance to make one of his idols into one of his rivals when he meets Andrei Arlovski on Saturday’s main card. Impressively, over his young seven-fight career Tuivasa has finished every last one of those fights by KO/TKO, and all in the first round on the way to staying undefeated.

Also from down under, former Invicta champ Megan Anderson makes her long-awaited walk to the Octagon as she participates in the first ever non-title women’s featherweight bout in UFC history when she meets Holly Holm. The Gold Coast native has her sights set on champ Cris Cyborg, and in the 17 months since her last pro fight has been collecting tools for her toolbox.

“I’m a different martial artist from when I last fought…and I think a lot of people are gonna be shocked.”
RELATED:

Return of the Punk

CM Punk’s second outing in the Octagon will be an exercise in trying to wash away the sting of his first, and a statement to his detractors that he belongs in the world of MMA. Armchair critics smugly dismissed Punk when he was quickly submitted by Mickey Gall back in 2016, confident that they were right when they opined that he could never make the transition from entertainment-driven professional wrestling.

In the wake of that defeat, Punk remained undeterred and continued his training. And with the countless hours in the gym, he suddenly finds himself with the opportunity to make a statement win in front of his hometown of Chicago. Win or lose, this is a fight to show the world the CM Punk is exactly where he belongs.