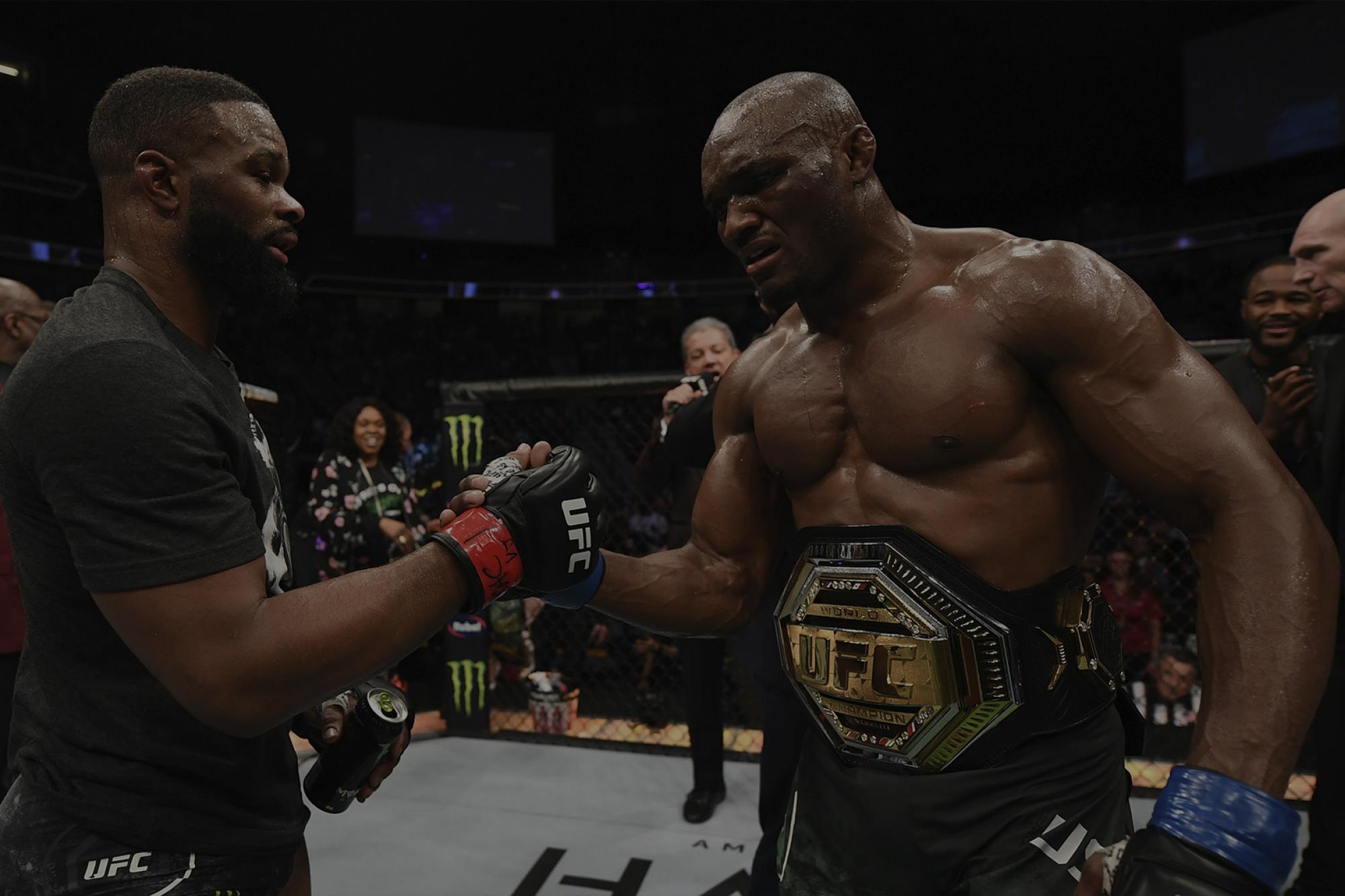 Jon Jones defends his belt, Kamaru Usman earns his own and much more in this edition of Talking Points
By Steve Latrell • Mar. 3, 2019

Another wild night in Vegas is in the record books. A new champion was crowned, while another continued their reign unabated. Heart-stopping moments and jaw-dropping performances were everywhere to found; so much so that president Dana White said he would be sending out a more bonus checks than the standard four that come with any UFC event.

There’s plenty to consider, so let’s dive right in.

These are the UFC 235 talking points.

So complete was Usman’s performance that Woodley was nearly unrecognizable as one of the most active and successful welterweight strap-holders in history.

Watch Kamaru Usman in the Octagon after UFC 235

“When it comes to mixing it up, I can do it better than anyone,” Usman said. “You think I’m going to wrestle and then I strike you, you think I’m going to strike and I grapple you. I confuse them and I break them. This is mixed martial arts for a reason and I’m the best, I’m the champ.”

On this night, it was impossible to argue with him.

A promo clip for UFC 235 that played heavily this week featured Anthony Smith stating Jon Jones wasn’t “some unbreakable superhero.” But after watching him dissect yet another opponent, that statement isn’t so definitive.

Smith didn’t make it easy, and in fact took Jones the distance, but Jones still found room in the performance to set a new light heavyweight title fight record for strike differential (+193). He also moves within one bout of tying Georges St-Pierre for UFC title fight victories.

Watch Jon Jones and Anthony Smith in the Octagon after their battle at UFC 235.

Surging light heavyweight star Thiago Santos was in town to watch the main event, and he seems to be the next logical opponent to try to break the unbreakable. Dana White later confirmed that was the fight he would like to see.

Macy Chiasson’s experiment at bantamweight paid huge dividends as she savagely finished veteran Gina Mazany in a mere minute and 49 seconds. Only Ronda Rousey and Amanda Nunes have had faster finishes at bantamweight, and that’s good company to be keeping. With a brutal right hand among some perfectly timed combinations equaling a clinical TKO, Chiasson’s size and speed look to make her a huge headache for other fighters in the division going forward.

Not to be outdone in the FIGHT PASS prelims, Edmen Shahbazyan needed only 38 seconds to score his TKO against Charles Byrd. This would be impressive enough in and of itself, but that makes the eight out of nine fights as a pro that Shahbazyan has ended by KO/TKO in the first round on his way to remaining undefeated.

Brazilian sensation Johnny Walker kept up his logic-defying knockout streak alive, this time needing only 36 seconds to eliminate Misha Cirkunov and earn a performance bonus. The culprit this time was a flying knee, which joined James Irvin's flying knee as just the second of its kind in UFC light heavyweight history. In a bittersweet twist, Walker’s now-trademark celebration of doing “The Worm” resulted in a possible shoulder injury while he awaited Bruce Buffer’s announcement of the fight’s result.

The long-awaited Ben Askren debut in the UFC didn’t start in a promising fashion. Body-slammed by the returning Robbie Lawler, he soon found himself under a hail of ground and pound that nearly ended the fight scarcely after it started. But, as he does, Askren got himself in position for a submission and secured the choke to keep his impressive undefeated streak alive. From the Octagon, he welcomed all comers in the welterweight division.

If Pedro Munhoz wasn’t on the bantamweight map before, he emphatically is now. Fighting through a nasty-looking head wound, he made Cody Garbrandt pay the price for standing in the pocket and trading with him. With less than ten seconds in the first round, Munhoz ended the evening for “No Love” with a devastating KO. While it lasted less than a round, the frenetic action by both men earned them Fight of the Night.

Original Ultimate Fighter winner Diego Sanchez moved into a third place tie for the most UFC wins in history with his one-sided, vintage mauling of Mickey Gall. The second round TKO was the veteran’s first finish win in over a decade, and the effort garnered a performance bonus.